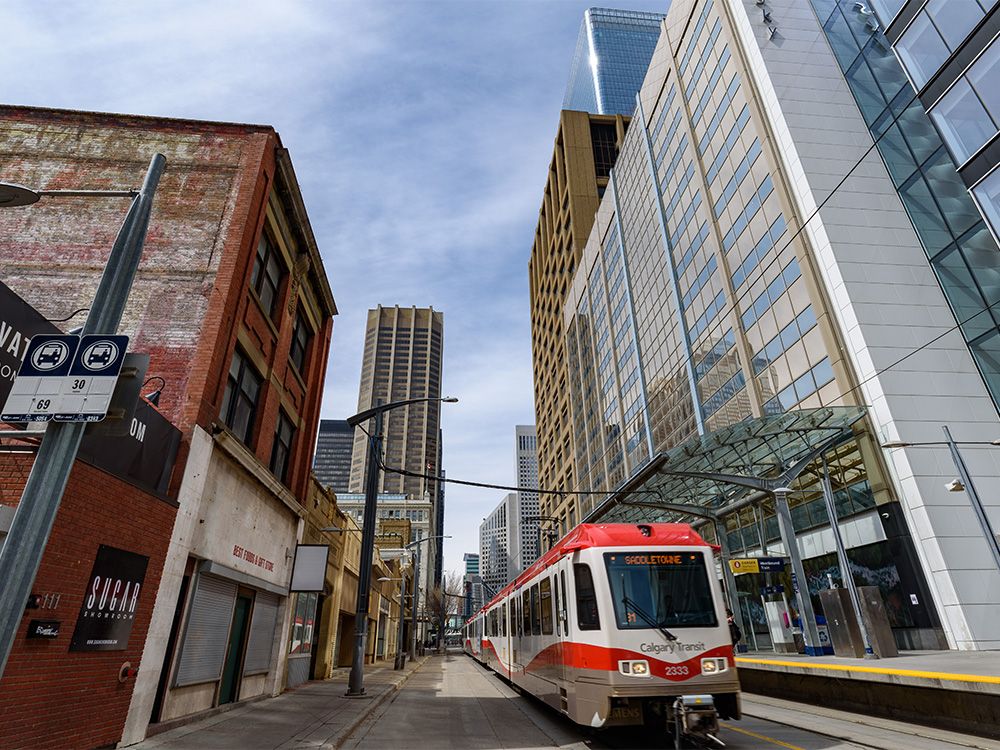 Calgary’s mayor said it’s encouraging to see the province’s report on downtown revitalization echoes many of the key points of the city’s existing Greater Downtown Plan.

The final report of the Calgary Office Revitalization and Expansion (CORE) working group, established by Jobs and Economy Minister Doug Schweitzer last year, was released Tuesday and detailed some possible solutions to the downtown problems of empty buildings, an eroding tax base, safety concerns and the need for improved vibrancy outside of office hours.

Downtown Calgary continues to have a high office vacancy rate of about 29 per cent.

The study by the UCP working group found diversifying the downtown to attract new investments, providing more incentives and introducing initiatives to support safety and quality of life by addressing homelessness, addiction and social disorder should be prioritized.

As well, the study highlighted the possible benefits of developing a Calgary post-secondary education downtown strategy that would bring more students downtown.

“I’m really happy to see that there is an agreement that the incentive program for downtown conversions was needed,” Mayor Jyoti Gondek told reporters on Tuesday. “We’ve seen evidence of increased public sector investment as a result of that incentive program.”

The City of Calgary has invested millions in financial incentives for development projects to convert offices to residential uses. There are 28 potential downtown office buildings that have been flagged as good candidates for conversion, and there are conversion projects in the works already.

The mayor said she was pleased to see post-secondaries come up in the report as a possible solution.

“We’ve had a lot of conversations with the University of Calgary, with Mount Royal, with groups like Ambrose, all of our post-secondaries are important to our future and trying to get them engaged in downtown is a really good thing,” Gondek said.

There is a tremendous value for students to have classes in downtown spaces, she said.

“There was an investment of $4 million into our downtown in our provincial budget. And although I still think that wasn’t enough, it’s a start,” Gondek said, adding that she’s happy to see the province is on the same page about what Calgary needs to do with the downtown.

The $4 million has been used to fund some of the safety initiatives the city has put in place downtown. Gondek said the report shows the province is aligned with what the city has been doing and is a step towards building trust.

“I count on asking for further financial support from the provincial government,” she said.

Schweitzer said in a news release that Calgary’s downtown has long been a symbol of a healthy and vibrant Alberta.

“The No. 1 thing the provincial government can do to support the downtown core is to create the best business environment to grow and attract investment to our province. That’s what we’re doing,” the minister said.

“Now that we have received the final report from the working group, we are reviewing their ideas to address the issues facing downtown Calgary, including diversity, safety, vibrancy and business growth.”

The city’s downtown has struggled for several years, with oil prices collapsing almost eight years ago, resulting in layoffs, and the COVID-19 pandemic leading to more layoffs and about two years of work-from-home orders.

“This report was delayed by over seven months, only to put forward many of the ideas in our strategy that have been attacked by the UCP,” Ceci said in a news release.

The NDP put out its own strategy for fixing some of the issues downtown in April ahead of the release of the UCP’s report, which stressed the importance of economic diversification, the creation of an innovation district and direct dining to support the City of Calgary’s Greater Downtown Plan.

Ceci said the strategy the NDP put forward also highlighted the importance of supporting small businesses, events and festivals, transit, more child-care spaces and affordable housing units in the city’s downtown. As well, the NDP continues to call on the UCP for improved support for mental health and addictions.

“Worst of all, (the UCP) fails to provide any funding or timelines and proposes to study the issue further. It’s just a plan to make a plan and will likely be pushed aside and forgotten about by the UCP,” said Ceci.

“We need immediate action to revitalize our downtown core.”

Sign up to receive daily headline news from the Calgary Herald, a division of Postmedia Network Inc.

Thanks for signing up!

A welcome email is on its way. If you don’t see it, please check your junk folder.

The next issue of Calgary Herald Headline News will soon be in your inbox.

We encountered an issue signing you up. Please try again