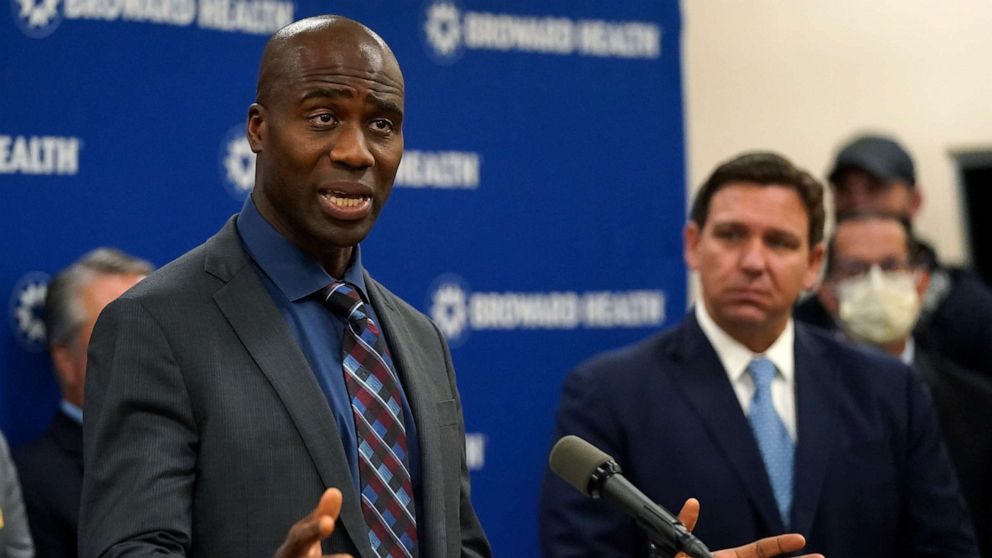 There is growing pushback among the health care community over Florida’s decision to advise against vaccinating healthy children for COVID-19, with an increasing number of health officials coming forward to strongly criticize the move.

On Monday, Florida Surgeon General Dr. Joseph A. Ladapo announced his state would become the first in the country to make such a formal recommendation.

“The Florida Department of Health is going to be the first state to officially recommend against the COVID-19 vaccines for healthy children,” Ladapo said at the end of a 90-minute roundtable discussion in West Palm Beach, Florida, hosted by Gov. Ron DeSantis, aimed to close the curtain on the “COVID theater once and for all.”

However, criticism swiftly followed, coming from many of the nation’s leading health officials.

The American Academy of Pediatrics, and its Florida chapter, called the decision “irresponsible,” reasserting that the COVID-19 vaccine is still the nation’s “best hope for ending the pandemic.”

“The Surgeon General’s comments today misrepresent the benefits of the vaccine, which has been proven to prevent serious illness, hospitalizations and long-term symptoms from COVID-19 in children and adolescents, including those who are otherwise healthy,” American Academy of Pediatrics Florida Chapter President Lisa Gwynn said in a statement Monday.

“The evidence is clear that when people are vaccinated, they are significantly less likely to get very sick and need hospital care. There is widespread consensus among medical and public health experts about the life-saving benefits of this vaccine,” Gwynn said.

The American Academy of Pediatrics, alongside the Centers for Disease Control and Prevention, have also been vocal in their support of pediatric COVID-19 vaccinations, stressing to parents that real-world data has demonstrated that vaccines are safe and effective at protecting children against severe disease, as well as against potential long-term consequences from the virus.

“Children can get sick from COVID, and some get very sick,” AAP President Dr. Moira Szilagyi said. “The virus is still circulating in Florida. … It is irresponsible to advise parents not to vaccinate their children against this virus.”

The Infectious Diseases Society of America also issued a strong statement in opposition to the move, which the organization described as “disturbing.”

“The Florida Surgeon General’s decision to recommend against COVID-19 vaccination for healthy children flies in the face of the best medical guidance and only serves to further sow distrust in vaccines that have proven to be the safest, most effective defense against severe COVID-19 disease, hospitalization and death,” Dr. Daniel P. McQuillen, president of the Infectious Diseases Society of America said in a statement on Tuesday, further suggesting that Florida’s decision “put politics over the health and safety of children.”

“Vaccinating eligible children against COVID-19 not only protects them, but it also protects their classmates, friends and vulnerable family members from a virus that has left nearly 1 million people in the United States dead in its two-year wake,” McQuillen added.

Among the other voices in the chorus of concerns is Dr. David R. Nelson, president of UF Health and senior vice president for health affairs at the University of Florida, where Ladapo is a professor.

In a statement released Tuesday, Nelson pointed to the widespread support for COVID-19 vaccinations in children among health experts.

“UF Health and the UF College of Medicine note that while children are generally at lower risk than adults for more serious consequences of COVID-19, the risk is not zero, and the vaccine has been shown to be safe and effective, with a very low risk of adverse outcomes,” Nelson said.

Nelson noted that although at times, there can be a “significant disagreement” in the public discourse surrounding COVID-19, “the principle of scientifically sound, evidence-based medical decisions” remains critical.

“Vigorous intellectual discussion around competing opinions is at the heart of the marketplace of ideas we celebrate and is a time-honored way to advance truth. That is no less the case here,” he wrote.

Nelson also underscored the fact that Ladapo’s role as the state’s surgeon general is entirely separate from his faculty position at the University of Florida College of Medicine.

“It’s deeply disturbing that there are politicians peddling conspiracy theories out there and casting doubt on vaccinations, when it is our best tool against the virus and the best tool to prevent even teenagers from being hospitalized,” Psaki said during a press briefing Monday.

However, the Florida Department of Health doubled down on their support of the surgeon general’s announcement, telling ABC News in a statement that “healthy children likely have no benefit from receiving the currently available COVID-19 vaccine.”

“It is essential for health care practitioners to analyze existing data on the COVID-19 vaccine alongside parents when deciding to vaccinate children,” Ladapo said in a statement Tuesday. “Based on currently available data, the risks of administering COVID-19 vaccination among healthy children may outweigh the benefits. That is why these decisions should be made on an individual basis, and never mandated.”