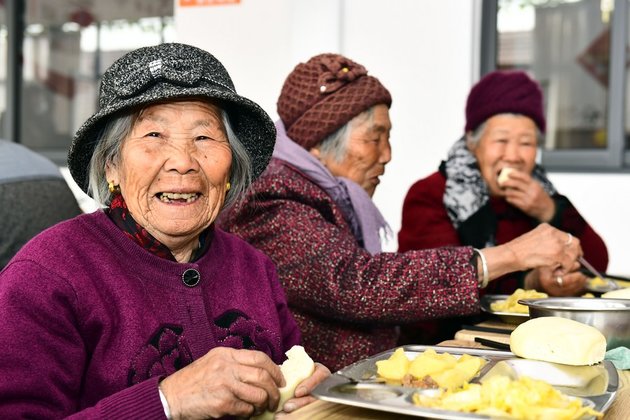 BEIJING, March 4 (Xinhua) — The Chinese government has been coordinating efforts to put into place a national pension program to tackle the strains from an aging population and regional imbalance.

The tactics came out of a holistic approach that is to upgrade the previously fragmented pension system like “playing a chess game on a nationwide chessboard.”

Through a central coordination mechanism, over 930 billion yuan (147.58 billion U.S. dollars) from the national pool went to make up for the shortfalls of local pension schemes last year alone.

China’s basic old-age insurance, a key program to ensure people’s well-being after retirement, has been evolving to a larger-scale management system since its establishment in the 1990s. The central coordination mechanism was set up in 2018 as the first step prior to building a national system to further address unbalanced pension burdens nationwide.

“Some regions have more surpluses, while the others with older populations are under heavier pressure to make pension payments,” said Qi Tao, an official from the Ministry of Human Resources and Social Security.

In 2021, over 210 billion yuan from the coordination mechanism went to the central and western regions as well as the northeastern “rust belt” provinces, as a greying population weighs on their pension payments and growing labor outflows squeeze pension income.

Using a nationwide chessboard as a metaphor, the head of the China Association of Social Security Zheng Gongcheng said the new national system will make the pension benefits fairer. “People won’t need to sacrifice their pensions for migrating to work, and retirees won’t have to deal with the risks from local pension fund shortfalls.”

Qi said a mechanism that assigns the respective expenditure responsibilities of central and local governments on pension funds will be built after the national program comes into force and the central government will not roll back its subsidy to the pension funds.

Apart from the coordination efforts and central subsidy, state assets totaling 1.68 trillion yuan from 93 centrally-administered enterprises and financial institutions have also been transferred to replenish the pension schemes.

China first piloted transferring state assets in five centrally-administered firms and financial institutions including the China Unicom and China Reinsurance Group in 2018. The transfer amount was 10 percent of their state-owned equity.

“Advancing the state-asset transfer to reinforce social security funds attests to the intergenerational equity of basic old-age insurance regime and the state-owned enterprises’ dedication to share their development benefits to the public,” said Lu Qingping, an official at the Ministry of Finance.

China was among the most improved performers in the 2021 global pension index as a result of significant pension reform, according to the index report released by Mercer, a global human resources consulting firm.

The Chinese index value increased from 47.3 in 2020 to 55.1 in 2021 primarily due to higher net replacement rates and improved regulations, the report said.

The country has the world’s largest social security system, including pensions, medical and health care, and social assistance. By 2021 end, a little over 1 billion people had subscribed to basic old-age insurance across the country.

“The provision of financial security in retirement is critical for both individuals and societies as most countries are now grappling with the social, economic and financial effects of aging populations,” the report said.

Official data showed that China has shown a deepening aging trend. By the end of 2021, people aged 60 and above accounted for 18.9 percent of the total, 0.2 percentage points higher than that of the previous year.

Noting that many systems face similar problems in the decades ahead, the report suggested “encouraging higher levels of private saving, both within and beyond the pension system, to reduce the future dependence on the public pension,” among other measures for improvement.