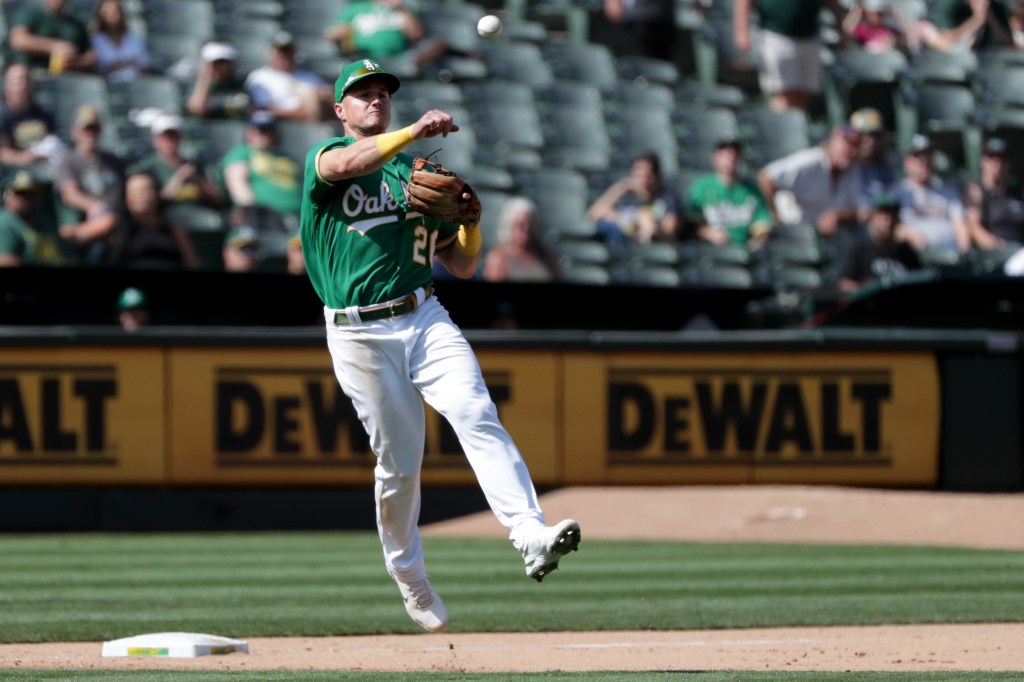 And, one day after right-handed starter Chris Bassitt was traded to the Mets, Chapman spoke at A’s mandatory report day about how himself, Matt Olson, Sean Manaea and Frankie Montas are preparing for a season — without knowing if they’ll be playing together for Oakland.

“It seems like you see those four guys’ names get thrown around quite a bit. But talking to those guys, you can’t really predict the future. Who knows what’s going to happen?” Chapman said. “It is a business. And it’s one of those things where you know that it’s gonna happen eventually, when not everybody stays an A for life.

“So, for us, it’s just focused on — no matter what team any of us are on, Opening Day is April 8, right? So I need to get myself prepared, these guys need to get themselves prepared. But as long as we’re wearing these colors, we’re expecting to win, and we want to go out there and do everything we can to win baseball games and have a good season.”

Chapman and Olson both took batting practice together during the A’s optional workout for players on the 40-man roster, all of whom had been locked out by MLB until Thursday. Both have had their names in the trade market even before the lockout, but the rumor mill has ratcheted up since Thursday.

Olson continues to be frequently linked to the Braves in the event that Atlanta doesn’t bring Freddie Freeman back. Other teams rumored to be interested in the All-Star and two-time Gold Glove-winning first baseman include the Yankees and the Rangers.

Meanwhile, a recent report from The Athletic’s Ken Rosenthal listed the Phillies as a team with interest in Chapman, which Alex Coffey of the Philadelphia Inquirer corroborated but reported won’t happen unless the A’s receive a top prospect from the Phillies. While Chapman would love to know what is going to happen sooner rather than later (like any human would), he said he’s prepared for whatever is to come.

“That’s kind of what you sign up for when you play this game — you know that something like this could happen anytime,” Chapman said. “It’s like when you get called up in the minor leagues, it’s drop everything where you’re at and go get on a plane, right? So I’ve been through that process before and, I’ve got my family and I’ve got good people around me that can help me make that transition. So no matter what happens, I’ll be prepared.”

He’s got plenty of people he could talk to about what it’s like to be traded, including his former teammate in Bassitt. Chapman said it’s “never easy to lose one of your teammates,” but was more happy for him — even if he ends up being a division rival of Bassitt’s after a possible trade to Philadelphia.

“It’s somebody that you’ve grown to care about your relationship with, but I’m excited for him because of the opportunities on that Mets team,” Chapman said. “It seems like they’re making a push, they’re going for it, so it seems like an exciting time to be over there. And I’m sure he’s gonna fit right in — I mean, he likes to play winning baseball, so it’s going to be good for him.”

New A’s manager Mark Kotsay said trades like that are a “part of the game” and mentioned the five times he’s been traded. As a coach with the A’s for the entire big league duration of possible trade targets, he understands how his players feel about Bassitt.

“Chris, his spirit, his grit, exemplify what an Oakland Athletic is about,” Kotsay said. “And so obviously, he’ll be missed. But we’ve all been through it. We’ve all experienced it. Our focus is now on the club that’s in there and being prepared for our season.”

Chapman said he “loved” that Kotsay got the manager job, but he also had praise for Oakland’s prior manager Bob Melvin, who left to take the Padres’ job.

“We had a lot of good times with BoMel,” Chapman said. “I know he’s going over to a superstar team that’s ready to win now, so I’m excited for BoMel. He’ll be great. I feel like that team probably needed a little turnaround after how they finished last year, and he’s the perfect guy to go do that.”

Chapman said he gave Kotsay some ribbing over ignoring his congratulations text when he got the job, as MLB’s lockout rules prohibited team officials from contacting players. But Chapman said the two former Cal State-Fullerton Titans already have a strong bond.

“I’m excited. I know he brings a lot of energy,” Chapman said. “He’s smart, played the game for a long time, he’s been around a lot of good players. I think he’s going to be great for the returning guys and the young guys. I think he can reach everybody. I think it’s going to be a lot of fun.”

As for his on-field play, Chapman had “spurts” of his previous All-Star form and hit 27 homers, but only batted .210 (with a .716 OPS) and struck out 202 times. Coming off of a hip surgery that ended his 2020 season early, he spent the offseason putting on 10 pounds to get “the weight that I was missing back.”

“I feel like I have the strength back in my lower half,” Chapman said. “Last year, I wasn’t hurt by any means, I was healthy, I was good. You just don’t have enough time to build that muscle memory, build that strength back. That was a big goal for me this offseason, was to get back to doing what I do well — be able to move well, be strong and be able to be more consistent with my swing.”

When asked if he noticed the added weight on Chapman, Kostay quipped: “If he did, he carries it well. I know if I put on a few pounds, especially at the end of my career, it wasn’t a good thing.”

And whether it’s for the A’s or for another team, Chapman’s assessment of himself could leave plenty of baseball people excited about his season to come.

“I know, when I’m healthy, what I’m capable of, and I’ve shown it before in this league,” Chapman said. “I think I want to return to what I was doing in ‘18, ‘19, but just a more experienced, healthier version of that.

“Because I think this is the healthiest I’ve ever felt.”