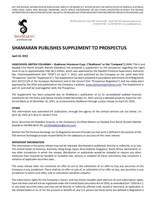 /NOT FOR RELEASE, DISTRIBUTION OR PUBLICATION, DIRECTLY OR INDIRECTLY, WITHIN OR INTO THE UNITED STATES OF AMERICA, AUSTRALIA, HONG KONG, JAPAN, NEW ZEALAND, SINGAPORE, SOUTH AFRICA, SWITZERLAND, OR ANY OTHER JURISDICTION IN WHICH THE RELEASE, DISTRIBUTION OR PUBLICATION WOULD BE UNLAWFUL OR REQUIRE ANY OTHER MEASURES THAN REQUIRED BY SWEDISH OR CANADIAN LAW./

VANCOUVER, BC, April 26, 2022 /CNW/ – ShaMaran Petroleum Corp. (“ShaMaran” or the “Company”) (TSXV: SNM) (Nasdaq First North Growth Market (Sweden): SNM) has prepared a supplement to the prospectus regarding the rights issue of up to approximately USD 30.5 million, which was approved by the Swedish Financial Supervisory Authority (Sw. Finansinspektionen) (the “SFSA”) on April 7, 2022, and published by the Company on the same date (the “Prospectus” and the “Supplement”). The Supplement has been prepared in accordance with Article 23 of Regulation (EU) 2017/1129 of the European Parliament and of the Council (the “Prospectus Regulation”) and has today been approved by the SFSA and published on the Company’s website, www.shamaranpetroleum.com. The Supplement is part of, and shall be read together with, the Prospectus. View PDF version.

The Supplement has been prepared due to ShaMaran´s publication of (i) its consolidated audited financial statements for the three and twelve months ended December 31, 2021 and (ii) a detailed property report for the Atrush Block as of December 31, 2021, as announced by ShaMaran through a press release on April 25, 2022.

OTHER
This information was submitted for publication, through the agency of the contact persons set out below, on April 26, 2022 at 5:30 p.m. Eastern Time.

IMPORTANT INFORMATION
The information in this press release may not be released, distributed or published, directly or indirectly, in or into The United States of America, Australia, Hong Kong, Japan, New Zealand, Singapore, South Africa, Switzerland, or any other jurisdiction in which the release, distribution or publication would be unlawful or require any other measures than required by Swedish or Canadian law. Actions in violation of these restrictions may constitute a violation of applicable securities laws.

The subscription rights for the Company´s shares, and any shares issuable upon exercise of such subscription rights, have not been and will not be registered under the United States Securities Act of 1933, as amended (the “1933 Act”), or any state securities laws, and may not be directly or indirectly offered, sold, resold or exercised, as applicable, in the United States or to, or for the account or benefit of, any U.S. person (as those terms are defined in Regulation S under the 1933 Act) unless they are registered under, or the transaction is exempt from the registration requirements of, the 1933 Act and applicable state securities laws.

ABOUT SHAMARAN
ShaMaran is a Kurdistan focused oil development and exploration company which holds a 27.6% interest, through its wholly-owned subsidiary General Exploration Partners, Inc., in the Atrush Block and as announced in the Company’s news release of July 12, 2021 upon successful closing of the acquisition from a TotalEnergies’ affiliate will then also hold an 18% interest through its then wholly-owned subsidiary TEPKRI Sarsang A/S in the Sarsang Block.

ShaMaran is a Canadian oil and gas company listed on the TSX Venture Exchange and the Nasdaq First North Growth Market (Sweden) under the symbol “SNM” and is part of the “Lundin Group of Companies”.